We read about security breaches and malware campaigns happening all the time. However, when a company you trust and work with discloses a security breach, things get personal. You start worrying about your sensitive information.

Recently, one of the biggest Japanese consumer electronics companies, Panasonic, suffered an attack. The company revealed that unknown threat actors have gained to the company’s internal network.

Unfortunately, Panasonic detected the breach on November 11th, 2021, but it has been around June 22nd. This means users’ data was accessible for more than 4 months. The breach is as big as the companies popularity and reputation, which is pretty alarming.

So, what is the breach all about? What did the attackers access in the process? Is Panasonic working on the case? Here’s everything you need to know about it.

Panasonic doesn’t seem to get a break from attacks. First, a campaign hit its Indian branch with a huge ransomware attack. This resulted in the harvesting of more than 4 gigabytes of data.

Now, the company faces yet another threat. Hackers gained access to the company. As a result, they were able to access data on the file server during the intrusion.

As mentioned, the company disclosed the breach in a short statement published on November 26th, 2021:

“Panasonic Corporation has confirmed that its network was illegally accessed by a third party on November 11, 2021. As the result of an internal investigation, it was determined that some data on a file server had been accessed during the intrusion.” 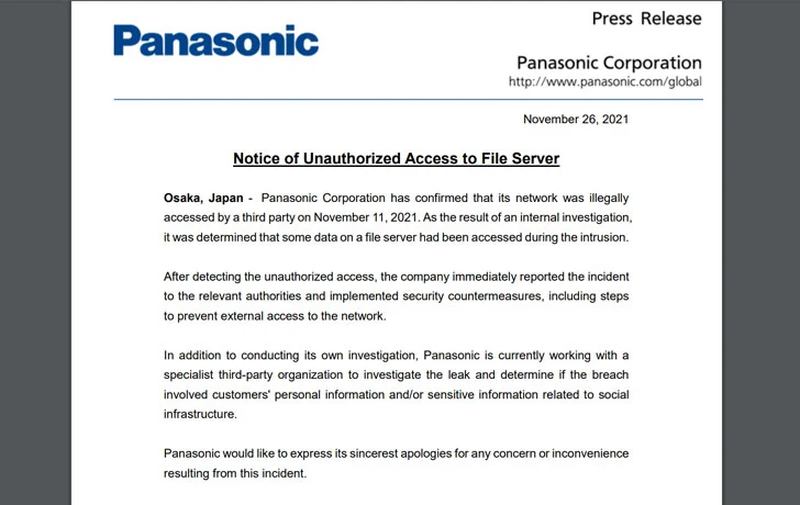 Japanese outlets such as Mainichi and NHK had something to say. According to The Record reports, the breach has been around for 4 months (June 22nd).

It doesn’t end here. Unfortunately, there’s more bad news. Apparently, the attackers were able to harvest a lot of information in the attack.

Additionally, the company is working with specialist third-party organizations to investigate the leak. They’re double-checking if the attackers have truly accessed sensitive data at the moment. Here’s what they said in a statement:

“In addition to conducting its own investigation, Panasonic is currently working with a specialist third-party organization to investigate the leak and determine if the breach involved customers’ personal information and/or sensitive information related to social infrastructure.”

Moreover, other outlets stated that the server has information about Panasonic’s business partners and its technology. This could pose a threat to the company. We’ll just have to wait and see what the security companies have to say about the matter.

The Attack on Japanese Companies Continues

Now, Panasonic suffers the same fate and has disclosed the breach on November 26th, 2021. Finally, they ended their statement with the following:

“Panasonic would like to express its sincerest apologies for any concern or inconvenience resulting from this incident.“

Consequently, data breaches are on the rise. They’re not stopping there either. Even big companies with the latest technologies have fallen victim to such attacks.

Everyone is vulnerable. All you have to do is be aware of what’s going on. Attackers usually have no specific target; you could be next on their list. Stay safe.

Hello XD Ransomware – A Typical Attack with a “Backdoor” Twist